In June, the Gateway team and our extended family descended on Amsterdam, along with 1300 other insurtech advocates, to attend the biggest insurance festival in Europe. Digital Insurance Agenda, is the ‘must see’ event for the European Insurtech community.

Next week, HUMN return to the DIA stage, so make sure you catch them if you are in Munich.

I spoke to Chris Clarke (Chief Product Officer at HUMN) to find out how it felt to demo his product live on stage back in June. 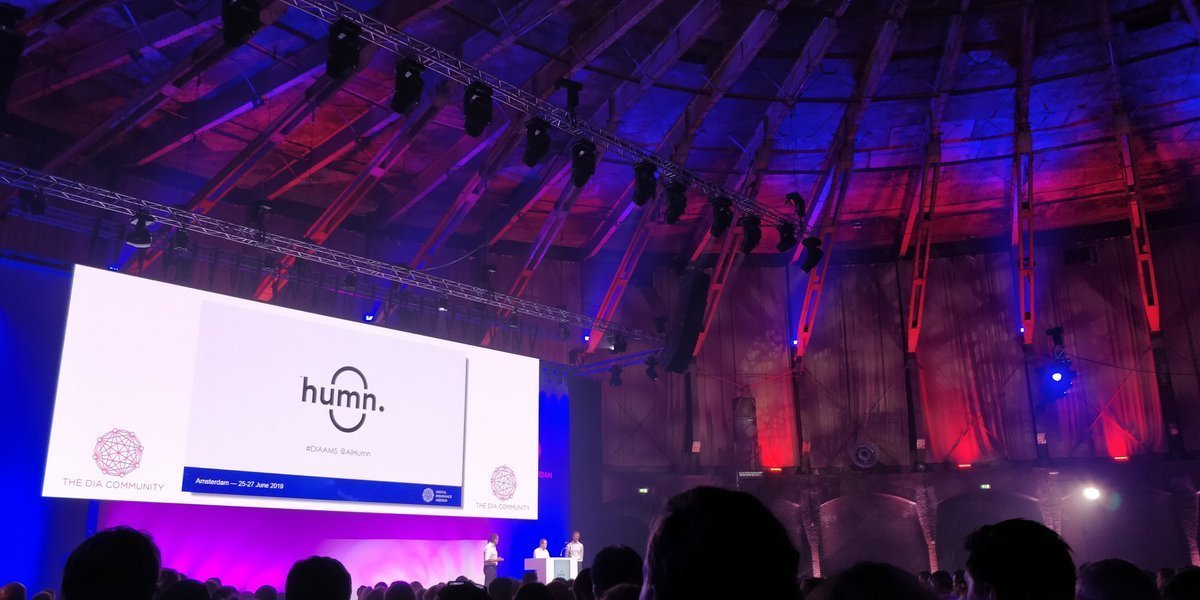 How did you feel standing backstage?

Nervous. I remember watching the demo just before ours on the tv screens back-stage and not really absorbing any of it.

And did those feelings shift the moment you stepped out into the spotlight?

Yes. Oddly, any sense of nervousness evaporated as soon as I got up there. Because we’d practised a lot I think auto-pilot just kicked in.

The audience was huge – 1300 people. Is that the biggest audience you have ever addressed? And does size make much difference to how you present?

I’ve presented to large audiences before but nothing near this size! Surprisingly though, the size of the audience wasn’t the most difficult thing to adjust to – it was the format.

Presentations I’m used to giving are much longer, don’t have extremely strict time limits and you normally have presentation slides to talk to that act as visual cues for what you are going to say. At DIA you have 8 mins to get across everything you want to say (there’s very little room for error so your phrasing needs to be precise) plus do a demo and no slides. Throw in an audience of 1300 insurance experts and it can get a little nerve-wracking.

Yes, the 8 minute time slots seem like a big ask. It must be hard for founders to create a well rounded story in this time-frame. How did you tackle this challenge?

This was definitely the biggest challenge. Distilling the why, how, what of the company into engaging & understandable chunks, crafting a relatable story while demoing the broad features of the platform and doing all this in 8 mins meant we needed to be ruthless about what was cut and careful about what we left in. Watching a lot of Show and Tells from previous DIAs helped a lot here – taking tips from the good demos and noting what to avoid from the ones that could’ve gone better.

And were you nervous to demo live?

A bit but with enough prep and the right sacrifices made to the demo gods things normally turn out ok.

Do you have any top tips to share with fellow founders?

Be deliberate in your messaging , think about what you want to get out of it – whether it’s customers, commercial partnerships or piquing the interest of potential investors then tailor your pitch specifically to those audience members.

Avoid arcane technical jargon or going deep on detail, the goal should be to convey meaning.

Lastly, resist the temptation to cram too much in. Keep it simple and stick to the core messaging. It’s ok to allude to additional topics without going into detail – it may even spark some follow-up interest later on in the event.

How did you feel when you stepped off the stage?

It meant we could stop mumbling the same sentences to ourselves over and over to memorize the delivery – a relief for everyone involved. Things had gone to plan and the demo was behind us so that felt good but it was straight back to the booth to field questions.

What happened in the hours following your presentation, and did you get the reaction you were hoping for?

We did, the reaction was extremely positive. Plenty of people from very relevant companies came to our booth showing interest in what we are doing which ultimately lead to a number of new and exciting business opportunities for us.

Four months on, what ongoing effects are you still experiencing?

Our experience at DIA lead to some fantastic new opportunities. From plans to roll out the product to new customers in a number of additional countries to some very promising new insurance company partnerships which will really help propel the company forward to new stages of growth.

Check out HUMN’s 8 minute demo in the video below.

You can find out more about how the Gateway supports insurtech founders here.